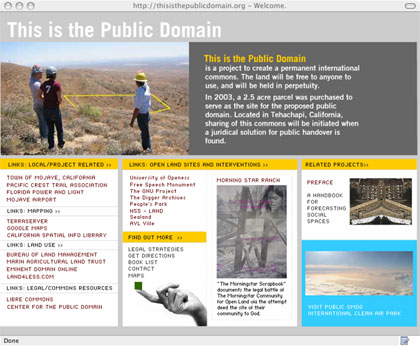 This is the Public Domain

This is the Public Domain is a project to create a permanent international commons. The land will be free to anyone to use, and will be held in perpetuity. In 2003, a 2.5 acre parcel was purchased to serve as the site for the proposed public domain. Located in Tehachapi, California, sharing of this commons will be initiated when a juridical solution for public handover is found....

This is the Public Domain / by Hari Kunzru

In recent years, artistic and political engagements with the concept of the commons have tended to focus on the new possibilities emerging online. Digital media is forcing change in IP regimes. Models based on shared, free or open virtualities are proposed to salvage public space at a time when it is physically under threat. As the marketplace becomes a mall and the village green a branded leisure-space the customary rights of free speech and association traditionally attached to such places are also eroded. Amy Balkin, living in California, has opted to look again at real space. Her project This is the Public Domain has a simple aim: ‘to create a public commons that will exist in perpetuity.’ ‘This land,’ she writes, ‘will be permanently available, free, for use by anyone. Citizenship is not necessary to participate.’ In a move which flies in the face of a social and legal system designed specifically to enforce land ownership, she has bought 2.5 acres of land near the Mojave desert and is instituting moves to transfer it out of her name into that of – nobody. Everybody. All of us....

Amy Balkin's art practice combines cross-disciplinary research and social critique with a search for unrealized possibilities outside current formal systems. Her ongoing project This Is the Public Domain is an effort to create a permanent international commons from 2.5 acres of land she has purchased near Tehachapi, California, via legal transfer of ownership to the global public.

Balkin finds historical precedents in the Commons of pre-17th century England and the LATWIDN (Land, Access To Which Is Denied No-one) experiment at Lou Gottlieb's Morning Star Ranch in Sonoma, California, in the 1970s. More recent parallels can be seen in the free/open source software movement and the copyleft and Libre Commons Res Communes licenses for intellectual property.

For the Wattis Institute Bulletin Board, Balkin has produced a series of posters in the tradition of 19th-century broadsides. With their combination of proclamation and information, these posters both promote the Open Land philosophy and present some of the problems and questions encountered in the search for a working real-world framework. 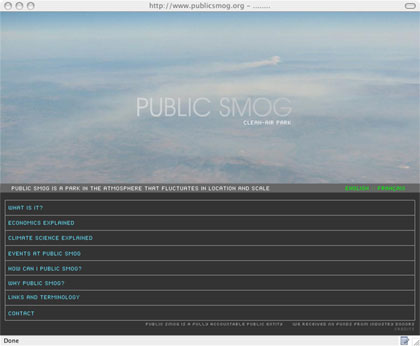 Public Smog is a public park composed of intangibles and built in the economic realm of carbon offset trading. Offsets purchased and controlled by the public will be inaccessible to polluting industries. The park will exist as a construct of heightened air quality occuring in the unfixed public space. The park's size will vary, reflecting shifting financial control of carbon offset shares, compounded by naturally occuring seasonal fluctuations in air quality....

COMMONspace is a project to explore and evaluate San Francisco's privately-owned public spaces.

In an effort to provide more public space downtown, the City of San Francisco has partnered with private developers to create a number of privately-owned public spaces. Some of these spaces are open and inviting - activated by public use. Others are under heavy surveillance, difficult to find, appear private, or are fundamentally inaccessible. To date, these spaces have not been systematically evaluated.

The goal of COMMONspace is to evaluate, activate and reclaim these spaces as a critical part of the public realm and as a valuable component of San Francisco's intellectual and artistic commons. We aim to determine just how public are these privately-owned public spaces?

One of the more critical issues facing outdoor urban human habitat is the increasing paucity of space for humans to rest, relax, or just do nothing.

For example, more than 70% of San Francisco's downtown outdoor space is dedicated to the private vehicle, while only a fraction of that space is allocated to the public realm.

Feeding the meter of a parking space enables one to rent precious downtown real estate, typically on a 1/2 hour to 2 hour basis. What is the range of possible occupancy activities for this short-term lease? 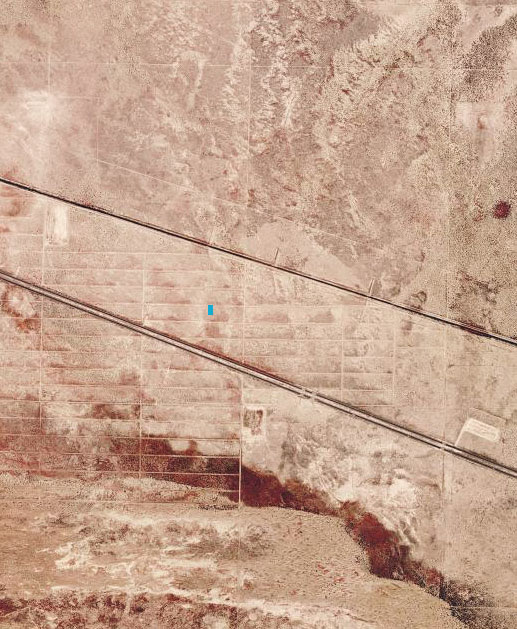 Aerial photograph of Cabinetlandia (the blue box) and vicinity. Your magazine-sized plot in Readerland is accessible on the north from the Union Pacific Railroad, and on the south from Interstate Highway 10.

There is an old Chinese story that says each person is connected by an invisible thread to the one other person in the world who is right for them, the person with whom they will eventually fall in love. In this tale, fate has already ordained the union of the pair; the couple need only find the thread to discover their predestined connection. For the Property issue, Cabinet decided to trace the sympathetic threads not between two individuals but between several disparate pieces of land: a half-acre parcel of desert scrubland in Luna County, New Mexico; 13 unusably small and bizarrely shaped lots in the New York City borough of Queens, originally purchased by the artist Gordon Matta-Clark for his 1973 work Reality Properties: Fake Estates; and 3.125 selims (2000 acres) of land in Eastern Amazonis Planitia on the planet Mars.

In July 2003, we received a letter from someone in San Francisco purporting to be a devoted reader of Cabinet, one Matthew Passmore. His outlandish and extravagant scheme for building the Cabinet National Library on one of the project spaces seemed to be the stuff of a Werner Herzog short. We published his letter and diagrams in issue 12. To our astonishment, this past summer he made good on his perhaps hasty promise to go out to New Mexico with some friends and build the library. Here is his report.

Upon reading the Cabinetlandia article, something immediately obvious occurred to us: Cabinetlandia would require a Cabinet National Library (i.e., a library containing all and only back issues of Cabinet magazine). What better way to establish your civilization than to create a repository for its organizing documents?

LAND gives access to land. Any person can stay in LAND and use it.

LAND is constructed from pieces of land in different places in the world. The various parts are added to LAND by persons who guarantee that anybody can stay in LAND and use it. Any person can initiate expansions of LAND. The geographical positions of LAND can be found in Manual for LAND. The manual is continuously updated at www.N55.dk/LAND.html. A current version can also be obtained by contacting N55.

LAND can be expanded by anybody who wants to add pieces of land to LAND. Formally, the parts of LAND remain the property of the persons participating in this way, but they guarantee that any person can stay in LAND and use it. By informing N55 of the position, a cairn will be put out to mark the place and the position will be distributed through the manual.

AVL-Ville is the biggest work of art by Atelier van Lieshout to date. This free state is an agreeable mix of art environment and sanctuary, full of well-known and new works by AVL, with the special attraction that everything is fully operational. Not art to simply look at, but to live with, to live in and to live by.

The Principality of Sealand

Sealand was founded as a sovereign Principality in 1967 in international waters, six miles off the eastern shores of Britain. The island fortress is conveniently situated from 65 to 100 miles from the coasts of France, Belgium, Holland and Germany. The official language of Sealand is English and the Sealand Dollar has a fixed exchange rate of one U.S. dollar. Passports and stamps have been in circulation since 1969, however, contrary to many misleading websites and news articles, Sealand passports are not for sale, and anyone offering such are selling forgeries. Within a radius of 500 miles of Sealand live more than 200 million people who enjoy some of the highest standards of living in the world. This area also encompasses the financial, industrial and cultural heart of Europe.

The Paradox of the 10 Acres Square / eteam

Through a successful ebay bid in January of 2004, 1975 eteam Dollars turned into 10 Acres of personal US property. The lot, a generic square within the larger American grid of townships, is located in the desert of Nevada. The closest settlement, Montello, “The town that refuses to die”, is 8 miles away and the almost abandoned airbase Wendover, at the edge of the Salt Flats, is located about 30 miles SE. It’s this 10 Acre lot and it’s surroundings that started the eteam’s search for solutions to problems, which were created by big systems that had made some small mistakes. They dealt with miscalculations of land surveyors, residues of the military, the appearance of dead cows and the existence of a “public road” , that went right through the center of their lot. In the middle of nowhere, things added up and finally turned into an “Artificial Traffic Jam”.

Founded in 2001, we have quickly become one of the loudest voices representing Toronto's streets, sidewalks, parks and alleyways.

We are dedicated to protecting our shared common spaces from commercial influence and privatisation. While some see the streets as an untapped source of advertising revenue we see protected public spaces as a fundamental pillar of a healthy democracy. If only wealthy advertisers have access to our visual environment, then freedom of speech suffers in our city.

We are citizens first, and consumers second. Public space must reflect this distinction, and should be fully and equally accessible by all who walk through it. Public space is the guarantee of a space for citizens to engage in society and interact with each other without commercial influence.

Through our advocacy projects we affect municipal policy, help shape the debate and create a space for concerned citizens to get involved and participate. Through our community events we lead by example by beautifying the city without a big budget, without sponsors and without logos. Together, we are reclaiming our streets and creating community.

We invite you to join us!

The Right to the City: Social Justice and the Fight for Public Space / Don Mitchell