The House That Herman Built

For over thirty-five years Herman Joshua Wallace has been in solitary confinement in the Louisiana State Penitentiary at Angola. Solitary Confinement, or Closed Cell Restriction (CCR) at Angola consists of spending a minimum of 23 hours a day in a six-foot-by-nine-foot cell. Five years ago the activist/artist Jackie Sumell asked Herman a very simple question: "What kind of house does a man who has lived in a 6'x9' box for over thirty years dream of?" The answer to this question has manifested in a remarkable project called THE HOUSE THAT HERMAN BUILT.

You may download a PDF of the project, or watch a sample of the CAD video fly-through. 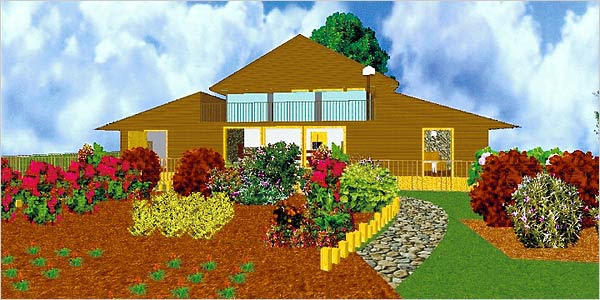 Minor improvements still occur to him, but Herman Wallace has more or less finished his dream house. It's got a yellow kitchen, a hobby shop and custom-made pecan cabinets. It should be noted that no actual house exists, but this is understandable. Mr. Wallace has been in solitary confinement at the Louisiana State Penitentiary in Angola for the last 34 years. [continue...]

ANGOLA 3 / The National Coalition to Free the Angola 3

The National Coalition to Free the Angola 3 was formed in 1998 to find justice for three innocent and wrongfully convicted men locked down at Angola, the Louisiana State Penitentiary, for nearly three decades.

You can purchase the book, The House That Herman Built, by contacting the National Coalition to Free the Angola Three's Coordinator, Marina Drummer, orgmarina@communityfuturescollective.org. Books are $20 dollar MINIMUM donation, including shipping.

- It was officially established as the Louisiana State Penitentiary in 1901.

- There is a 1,500 cattle beef herd, which is sold for profit, to the open market through Prison Enterprises.

- Every physically able prisoner is required to work for 2- 20 cents an hour a minimum of 40 hours a week.

- The 11,300 seat arena which houses the annual Angola Prison Rodeo, was completed in 2002, with prison labor.

- 2 New Chapels have been built on Angola in the last 2 years with profit from the Angola Rodeo and prison labor.

- Approximately 400 religious services and programs are offered each month throughout LSP.

- Prison View Golf Course, is open to the public inside Angola. 24 hour reservations are required and tee off is $20 (including cart rental).

Posted by nicholas_senn at 8:30 PM