Exhibition: "Geography and the politics of mobility"

The exhibition pursues questions around the transformative quality of locations and geographies at a time when subjects are no longer bound to one particular place. Rather than focussing on the formation of dislocated subjectivities due to global migration or the participation in virtual world-wide activities, Geography and the Politics of Mobility will look at the way places are being constituted through them. One of the recurring questions will be how the human trajectories and the traffic of signs and visual information form particular cultural and social landscapes and inscribe themselves materially in the terrain.

"Solid Sea 03 - The Road Map" is the result of an experiment carried out in the Jerusalem region. Members of Multiplicity accompanied, in one case by a person holding an Israeli passport and in the second a Palestinian, undertook two similar journeys. The first trip took one hour, the second more than five hours. These taxi journeys underline the extraordinary entanglement of zones, borders and control points which make this region one of the hardest in the world to inhabit.

Exhibition: "Tour-isms. The Defeat of Dissent"

"Tour-isms. The Defeat of Dissent" investigates different manifestations of tourism to work towards a critical analysis of the influence of this global phenomenon in contemporary society.

Klartext! The Status of the Political in Contemporary Art and Culture: A Series of Discussions with International Artists, Activists, Curators, and Theoreticians

This raises the questions: what levels do the social and political relevance of art operate on? Does the political content perhaps only satisfy the function of an alibi, with whose help the art market can clear its conscience? Does it make any sense at all to use art as a means to articulate social and political concerns? Can art be employed as an effective agent for the change or resistance to the hegemonic forces? Or is art doomed to be the decorative, irrelevant footnote to a power stronger than its own capacity for confrontation? What shapes should this kind of art assume? And in what context can it be most effective?

Multiplicity is a networked research team, exploring the European territory as it changes, in twenty-six different sites from Athens to Espoo, from Porto to Bucharest or Moscow. The basic premise is that borders are ungraspable, that architectural programs and urban limits are unstable - but everywhere, the subjective excess of "autopoetic innovations" creates recognizable patterns of change, at least for the observer who mingles with them....

Francesco Jodice is an architect, photographer and professor of Theory and Practice of the Technological Image at the University of Bolzano, Italy. He is a member of the group Multiplicity, an agency for territorial investigations based in Milan.
Posted by nicholas_senn at 7:30 PM

Deborah Kelly has been making socially engaged artwork since 1983. She was also Creative Director of Australia's largest public interest communications company for 7 years. Her projects seek to implicate broad audiences in the discourses of local histories, and to intervene into representation of place and power. Recent collaborative projects have included boat-people.org, graphic civil disobedience on refugees, mass actions on Aboriginal Land Rights, and the prize-winning public art project with Tina Fiveash "Hey, hetero!", shown in Sydney, Adelaide, Melbourne and Wellington. She co-curated and conceived the 2002 exhibition, symposium and tactical media lab BORDERPANIC, a Performance Space/Museum of Contemporary Art/Next 5-Minutes co-production, with Zina Kaye. She has given public lectures and workshops around Australia and in San Francisco, Los Angeles, Amsterdam and Ottawa. Her current projects include being commissioning editor/artist for "It's Great to Be Straight: a Critical Anthology Regarding Heterosexuality", boat people.org, and the ongoing "Refugee Legal Information Project" together with Smash Racism.

We are ALL Boat People

We are ordinary Australians who are appalled at the inhumane treatment of refugees by our government. We have decided to get involved and challenge the border panic encouraged by the current rhetoric of fear.

Our goal is to create a shift in the minds and hearts of our fellow Australians who have not seen the truth behind the lies told by the Howard Government and the mainstream media outlets that broadly support it's views.

We know that these unjust laws will eventually be changed - and we know that Australians will look back on this period with great shame. However we must act now with urgency to bring about this change before more people suffer. We believe that this will only happen through constant and increasing pressure from compassionate people like you.

So we ask you to start with this simple act: spread the We are all Boat People idea in your community and beyond.

Beware of the God

This site intends to be a resource of diverse material documenting, analysing, and musing upon the impacts and aspirations of religious literalists in the public sphere. It is being produced in Australia, in 2005, so that is its first focus. However, you will also find here information, ideas and reportage from other places, because even though context is everything, a global phenomenon is also something.

Deborah Kelly's installation, “Meeting a terrorist”, interrogates the Islamophobia of Reverend Fred Nile's call in the NSW Upper House for Muslim schoolgirls to be banned from wearing veils to public schools in the interest of 'unity'. Other prominent, self-proclaimed Christian politicians from WA, NSW and SA have supported this call, even urging a prohibition on the wearing of hijab in public places because of their fantasized fear that terrorists might hide weapons under them. In Kelly’s installation, the Madonna holds a box of 50 'concealed incendiary devices', while draped at her feet, an abundance of blue satin disappears into a small bottle of petrol. By repositioning the Madonna as the Veiled Woman, and posing her absurdly, as a terrorist, Kelly exposes the aspersions cast on Muslims by ill-informed and hysterical individuals.

A collaboration between multiple-media artist Deborah Kelly and photographer Tina Fiveash which has been raising issues -- and hackles -- around Australia is soon to be exhibited in Berlin. 'Hey Hetero!' uses the tactics and production values of mainstream advertising to question the invisible but omnipresent nature of heterosexuality.

BORDERPANIC was created to look at the tangle of xenophobic pathologies in the ascendant across all the white worlds, the resultant rise of anti-immigrant and anti-refugee discourses, and to be a cultural node of response to these themes which promise such ongoing disaster to the planet.
Posted by nicholas_senn at 9:00 PM

Jane Rendell is an architectural designer, historian and theorist. She is interested in interdisciplinarity, theory and history, gender and space, art and architecture, but particularly the relationship between spatial theory and critical practice.

She is currently completing A Place Between: Art, Architecture and Critical Theory, for Reaktion Press and working on a project of site specific writings entitled 'Writing Aloud'. She considers her writing to be a form of architecture, a critical spatial practice, and is exploring through research and teaching the possibilities for site specific writing. Recent work includes essays for artists and architects, such as Sharon Kivland, Jane Prophet and Hawkins/Brown and galleries, such as The Wapping Project and BALTIC, as well as text-based pieces for Brandon Labelle, Simon Morris and Brigid McLeer. 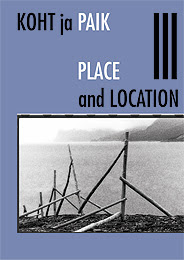 "A Place Between, Art, Architecture and Critical Theory" (PDF)

PLACE and LOCATION / Studies in Environmental Aesthetics and Semiotics III

In the last ten years a number of academic disciplines have come together in discussions concerning ‘the city’. This interdisciplinary terrain of ‘spatial theory’ has reformulated the ways in which space is understood and practiced. One of the books I am working on, A Place Between, focuses attention on the writings of such influential spatial thinkers as Michel de Certeau, Walter Benjamin, Hélène Cixous, Luce Irigaray and Rosi Braidotti. I do so to provide starting points for several speculative journeys between theory and practice. By stretching and playing out definitions like ‘art’ and ‘architecture’, theoretical reflection provides standpoints from which to explore what we might call critical spatial practice.

From "A Place Between, Art, Architecture and Critical Theory"

Despite current enthusiasm for interdisciplinarity, multi-disciplinarity and collaboration in art and architecture, I argue that there is still a deep-seated anxiety concerning the edges and crossing-points of disciplines. This anxiety is expressed through a tendency to make separations between different disciplines rather than connections. Making connections is necessarily a difficult business because it demands a questioning of terminologies and methodologies normally taken for granted, and a willingness to let go and to allow transformation....

Theoretical debates concerning urban culture have reformulated the ways in which we might understand the anxieties around the boundaries of disciplines as well as the potential places in which connections might be made. From cultural geography, for example, we have the notion of the ‘socio-spatial dialectic’ which suggests an inter-active relation between people and places, allowing us to consider the city as multiple sites of desire and flux. From feminist theory, we can understand the ‘internal’ space of individual subjectivity and the ‘external’ space of the urban realm to be a series of overlapping and intersecting boundaries and thresholds between private and public, inner and outer, subject and object, the personal and the social.

It is at these thresholds that many of the current debates about public art practice are located. On the oone hand, often considered to focus on their own 'private' worlds and the personal interests, artists who work in public spaces are often thought of as self- indulgent and arrogant. On the other hand, art works that attempt to relate to the ‘public’ as a particular social group or number of individuals who identify with one another, have often been criticised as simplistic and patronising. These kinds of ambivalent attitudes that respond to the placing of 'private' art outside the gallery in 'public' urban sites, raise important questions about the definitions, inter-relations and boundaries of the term public art.

The paper goes on to look at three modes of contemporary critical public art that help us to explore places between spatial theory and practice and between public and private....

The second event in the Making Public series centres on how publicness emerges in art and art writing.

Since her book Evictions (1996), Rosalyn Deutsche (Barnard College and Columbia University, New York) has become widely recognised as one of the foremost thinkers in connection with the relationships between contemporary art and the politics of space. Jane Rendell (Bartlett School of Architecture, UCL) has written extensively on gender, space, architecture and urbanism. She is currently working on the relationship between public and private voices in the practice of art criticism, especially in its confessional mode. Gillian Rose is Professor of Geography at the Open University, and has written extensively on gender and the public and private uses of visual images. She has also researched the impact of public art.

The academy for practice-based research in architecture and design (AKAD)

Writing Architecture is a course and series of workshops offered by AKAD, through Katja Grillner, at KTH. The project is shown at the AKAD exhibition at Lund Konsthall in january 2006. It shows the texts - stories, poems, collages, essays – which were written in the course, as well as film and photographs from the events. These workshops seek to raise the awareness of language and writing in relation to architectural and spatial explorations. Architects, designers, artists and researchers have been invited to explore their own textual modes of expression and develop critical modes of reading and discussing texts. Text and language are here regarded as design materials among others, and as unique tools for formulating and communicating critically the insights gained through an experimental research by design project.

"Travelling The Distance/Encountering Others" (PDF)

"Writing in place of speaking" (PDF)
Posted by nicholas_senn at 1:16 PM