PART 1: Love on the Line > Families divided by the U.S./Mexico border reunite for transnational picnics.

PART 2: Container City > Newark, New Jersey, a different kind of bordertown. Here, the border crossers are fifty feet long and they actually are taking over.

PART 3: A Visible Border > Twenty-first century immigrants respond to a world in which borders are closed for people, but open for products.

The Other Side / Bill Brown

The desert that marks the border between the U.S. and Mexico is the subject of Bill Brown’s deeply personal reflection on and exposé of the challenges surrounding Mexican immigration. Pensive, raw, and luminous images construct a montage of a land where immigrants leave traces of their struggles and hopes. Traveling along these same paths, Brown shows us “where the idea of America is up for grabs” and explores the vicissitudes of the politics and activism behind U.S. immigration policies. We ride in the cars of activists protecting the rights of migrants, set up water stations, listen to the tales of crossing attempts, learn the history of the land, and watch the shadows creep across the fixtures of life isolated in the desert.

Performing the Border is a video essay set in the Mexican-US border town Ciudad Juarez, where the U.S. industries assemble their electronic and digital equipment, located right across from El Paso, Texas. Performing the Border looks at the border as both a discursive and a material space constituted through the performance and management of gender relations. The video discusses the sexualization of the border region through labor division, prostitution, the expression of female desires in the entertainment industry, and sexual violence in the public sphere. Interviews, scripted voice over, quoted text on the screen, scenes and sounds recorded on site, as well as found footage are combined to give an insight into the gendered conditions inscribed in the border region.

In 2002, Laura Waddington spent months in the fields around Sangatte Red Cross camp, France with Afghan and Iraqi refugees, who were trying to cross the channel tunnel to England. Filmed at night with a small video camera, the figures lit only by the distant car headlights on the motorways, Border is a personal account of the refugees' plight and the police violence that followed the camp's closure.

The no border network is a tool for all groups and grass root organizations who work on the questions of migrants and asylum seekers in order to struggle alongside with them for freedom of movement, for the freedom for all to stay in the place which they have chosen, against repression and and the many controls which multiply the borders everywhere in all countries. This network is different from lobbying groups and NGOs because it is based on groups of grass root activists and intends to stay so.

Deletetheborder.org is an online community with the goal of nurturing a global network of movements against borders. We began the project in 2005. Sensing the tremendous potential energy and having seen the existence of many networks around the world like NoBorder.org and No One Is Illegal in Canada, we sought to use the latest technology to provide a site which would make international connections and act as a hub of resistance and emergence...

Tijuana is a new cultural hot spot. Influential publications in the United States, Europe, and Mexico have recognized the city as a vibrant site of innovation in the arts. Journalists, scholars, and critics alike celebrate Tijuana's diversity of artistic production from art made with traditional media, such as, painting and printmaking to installation and conceptual art; from photography to digitally derived images; from street-level video to ambitious feature films; from utopian architectural proposals to streamlined and economic housing design. As the city's newest art weekly recently announced, "Tijuana moves - and it's everywhere."

This exhibition will document the recent explosion of artistic experimentation in Tijuana, and will also explore the subtle shift in focus from art about the border experience to art that takes advantage of a new type of accelerated urbanism being pioneered in developing cities around the world.

Tracing an imaginary line along the US/México border and extending it directly across a map of the world, what emerges is a political equator that roughly corresponds with the revised geography of the post-9/11 world according to Thomas P. M. Barnett’s scheme for The Pentagon’s New Map, in which he effectively divides the globe into “Functioning Core,” or parts of the world where “globalization is thick with network connectivity, ﬁnancial transactions, liberal media ﬂows, and collective security,” and “Non-Integrating Gap,” “regions plagued by politically repressive regimes, widespread poverty and disease, routine mass murder, and ... chronic conﬂicts that incubate the next generation of global terrorists.”

inSite is dedicated to the realization of binational collaborative arts partnerships among nonprofit and public institutions in the San Diego-Tijuana region. Operating through a unique collaborative structure that is based on the active participation of cultural and educational institutions in the US and Mexico, inSite is focused on promoting artistic investigation and activation of urban space.

The distinctive character of inSite, understood as a cultural practice of intervention in the urban social weave, stems from a commitment to facilitate new works developed through a long-term engagement with the artists. The core of inSite, as it has evolved over the past twelve years, is commissioning projects as interventions in the extraordinary context of the San Diego-Tijuana border region. The axis of this project is a process of two-year periodic residencies that culminate in the realization of works sited in the public domain throughout the two cities. The flexibility to respond to the shifting interests of artists and institutions and, in turn, to test new structures of collaboration and venues for the presentation of innovative work, has been a fundamental characteristic of this project.

Europe's borders are increasingly frontlines of political and social dissent. Asylum-seeking and political migration are some of the most significant issues of our time. This discussion will explore the contentious role of borders in Europe and beyond, and the way artists are contesting these geographical and cultural perimeters.

At this evening seminar, artist Heath Bunting talked about his project, BorderXing Guide, which consists of 'walks' that traverse national boundaries without interruption from customs, immigration, or border police. The project is on display on Tate's website. German critic and activist, Florian Schneider discussed the disruption of European borders through civil disobedience campaigns. Writer and critic Armin Medosch chaired the discussion.

alien is a project by Heidrun Holzfeind about migration and borders. It integrates text and image based art work, general information about the issue and links to other websites.

Tijuana Calling is an online exhibition of five commissioned projects that make use of the Internet to explore various features of the Tijuana/San Diego border region, including cultural tourism, border dentistry, transborder narco-tunnels, vigilante surveillance drones, and the journalistic hype surrounding border crime. Like the inSite_05 Interventions, these projects grew out of a lengthy process of research and investigation. Although all five projects exist online, they adopt a wide range of artistic strategies, from gameplay to tactical literature. As part the inSite_05 web site, Tijuana Calling describes and links to these projects, but the projects themselves exist elsewhere on the Internet. 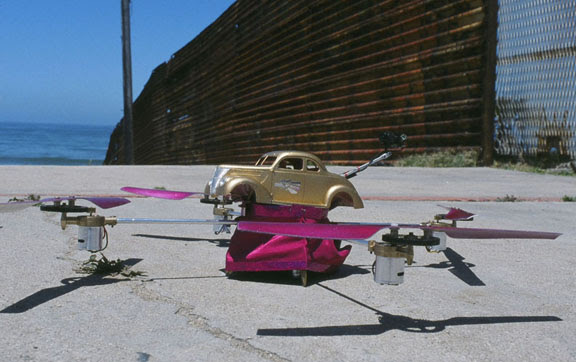 2005 — The LowDrone, the world’s first aerial lowrider armed with video surveillance capabilities, is invented. The LowDrone is currently stationed at one of the most surveilled spaces on the planet – the U.S./Mexico border between Tijuana and southern California.

Dentimundo.com is a multimedia documentary of this micro-economy between the U.S. and Mexico that investigates border dentistry while also presenting users with a directory of dentist clinics along the border.

”Cutting, Climbing, Crossing” will present a number of Heath Bunting’s recent works which deal with issues of borders, identity and physical space. Central to the exhibition will be the world premiere of Bunting’s ongoing project “The Status Project”, a mapping of the multi-layered logic of the mobility and legal routes of the social system. The work will be presented as wall-mounted diagrams, an interactive database and a 4,200-page manual!

We are all Boat People

The 'We are all Boat People' campaign is concerned in the broadest sense with the mental health of Australia. In our analysis, what we are facing is not so much a refugee problem as a crisis of xenophobia, a terrible and contagious national sickness. The border panic policies of our government are clearly designed to spread fear and hatred, disseminated through brilliant manipulation of the unspeakable psychoses of an occupying nation secretly uncertain of its own legitimacy.

Transit Migration is a transdisciplinary research, film, sound and exhibition project that builds on the collaborative efforts of academics, film makers, media activists and artists.

It examines the ways in which transnational migration movements are transforming Europe and asks how, and whether, it is possible to represent this reality in academic discourse, in the media and in art. The participants in the project develop and employ a wide variety of research methods, all of which are designed to work in a synergistic fashion.

MigMap conveys a picture of how and where the production of knowledge is currently taking place in the area of migration – and of who is participating in and has access to it. MigMap investigates precisely how the new forms of supranational governance that can be observed in the European migration regime function. It looks, for example, at how European standards in politics and civil society are implemented, and at the authorities, persons and institutions taking part in this process. It examines how the various key players in the public and private spheres are interrelated and funded, as well as at the ways in which these spheres overlap or differ in terms of focus, location or personnel. Finally, it analyses how responsibilities are allocated and legitimised – and explores the theories, data and discourses upon which current paradigms in migration are based.

As xenophobic border regimes around the world rigidify, activist groups are joining forces to denounce them and the neoliberal economics on which they stand. Amidst a worsening climate of vigilantism, San Diego based anarchist collective o.r.g.a.n.i.c. report on recent antiborder actions in the towns, desert wastelands and graveyards along the US/Mexico border

At the Tate Modern's Border Crossing seminar, the artist/activist approaches of panelists Heath Bunting and Florian Schneider threw divergent light on the politics of migration.

Just as resistance needs to be as global as capital, hacking the borders of Europe – physically and politically – needs to be as networked as the surveillance regimes that protect them. Florian Schneider, a veteran anti-borders activist himself, gives an overview of the multiple campaigns now underway across Europe....

borderlands e-journal / Borderphobias: the politics of insecurity post-9/11
Posted by nicholas_senn at 9:28 PM