"Whitey on the Moon"

My sense is that if most people know any reference to the music of Gil Scott-Heron ("GSH") nowadays, it would likely be the title of his arch, sardonic proto-rap single "The Revolution Will Not Be Televised," from the 1974 compilation album of that name. For many of us who grew up in the mid-1970s, this GSH album was the Richard Pryor concert of music -- the rebellious and pugnacious and smart as hell spirit of Malcolm X in 40 or so minutes. It was a common fixture in the record collections of the hosts of parties I attended then, and one that, when I was hosting, a guest was likely to pull out to play.

This song contained not only proto-rap, but some of the most beautiful and haunting songs you could ever want to hear, such as "Lady Day" and "Pieces of a Man." But the one that prompts this diary, on the 40th anniversary of the landing of Apollo 11, is "Whitey on the Moon," because I can't think of the events of that day without thinking of that song and the challenge that it offers.

"Whitey On the Moon" Lyrics by Gil Scott Heron

Stuff White People Do: Extend the White Conquest of the Earth Into Outer Space

To establish an awareness of outerspace as an integral part of the Chicano(a) ModernMythos/Reality/Iconography.

The Purpose of the MeChicano Alliance of Space Artists is revealing the presence of:

...through the use of modern outer space or cosmic iconography. 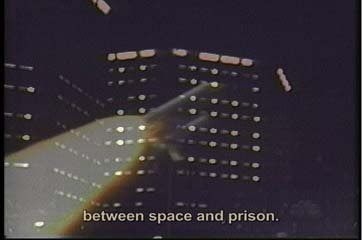 Space Ghost compares the experiences of astronauts and prisoners, using popular depictions of space travel to illustrate the physical and existential aspects of incarceration: sensory deprivation, the perception of time as chaotic and indistinguishable, the displacement of losing face-to-face contact, and the sense of existing in a different but parallel universe with family and loved-ones.

Physical comparisons such as the close living quarters, the intensity of the immediate environment, and sensory deprivation soon give way to psychological ones: the isolation, the changing sense of time, and the experience of earth as distant, inaccessible and desirable. The analogy extends to media representations that hold astronauts and prisoners in an inverse relationship: the super citizen vs. the super-predator. Astronauts, ceaselessly publicized, are frozen in time and memory whereas prisoners, anonymous and ignored, age without being remembered.

The end of the video introduces the notion of the "phantom zone" taken from Superman to describe incarceration as an in between space, a no man's land or a warehouse. A letter from an inmate explains how the space/time continuum can become reconfigured in prison: The time really goes by fast here. You can do years in prison and it seems like no time at all. That's because you don't remember any of the time you did. And that's because there's nothing to remember.

Trevor Paglen's The Other Night Sky

“The Other Night Sky” is a project to track and photograph classified American satellites in Earth orbit, a total of 189 covert spacecraft. To develop the body of work, I was assisted by observational data produced by an international network of amateur “satellite observers.” To translate the observational data into a useable form, I spent almost two years working with a team of computer scientists and engineers at the Eyebeam Center for Art + Technology to develop a software model to describe the orbital motion of classified spacecraft.

With these tools, I am able to calculate the position and timing of overhead reconnaissance satellite transits and photograph them with telescopes and large-format cameras using a computer-guided mechanical mount. The resultant skyscapes are marked by trails of sunlight reflected from the hulls of obscure spacecraft hurtling through the night.

In developing this project, I have been primarily inspired by the methods of early astronomers like Kepler and Galileo, who documented previously-unseen moons of Jupiter in the early 17th Century. Like contemporary reconnaissance satellites, Jupiter’s moons weren’t supposed to “exist,” but were nonetheless there. With this series, I want to ask what it means to see the traces of “secret moons” in the contemporary night sky.

Photographer Documents Secret Satellites — All 189 of Them / WIRED