Continental Drift is modular and experimental seminar which has embarked upon the "impossible" task of articulating the immense geopolitical and economic shifts which took place between 1989-2001, the effects of those changes on the emerging bodies of governance (i.e., the formation of economic blocs like EU or NAFTA) and in turn the effects on subjectivity today.

We seek individuals who are concerned about what is taking place around us in the name of politics. We may be activists, artists, cultural workers, non-aligned subjects, whatever singularities seeking possible lines of flight which may be collective. Our goal is to use these seminars to take our inquiries beyond self-interest and contribute to this pool that some have called the general intellect. We hope in sharing our thoughts, research and experiments, we may initiate further experimentations with collective research/action and actually connect to various movements.

We completed the first Chapter of Continental Drift, which was divided into two parts, with a September and October session in 2005. We continue this year with Chapter 2 and look forward to realizing further possibilities for informing and sharing our collective struggles.

The reasons for convening another session of Continental Drift include the sheer pleasure and encouragement of working together for a few days, sharing images and ideas, catching up on each other's projects and activities, and enjoying the warm hospitality of the folks at 16 Beaver Street again. But they go beyond that. They involve the states of the world and the states of our own lives, in ways which are both encouraging and sobering.

Having witnessed the cynical unleashing of a carefully planned, yet ultimately insane and useless war in Lebanon this summer, accompanied by the accelerating decay of already tragic situations in Palestine, Afghanistan and Iraq, and also by the seemingly endless escalations of security-fever around all the theoretically "open" borders of the Western world, more and more people have finally been forced to admit to thmselves that the rising wave of fear, suspicion and militarized aggression in the overdeveloped countries is not just an electoral ploy or a madman's rhetoric but a truly urgent situation with multiple causes, which may yet have more short-term consequences, leading to more explosions of violence – not to mention the other possibility, the one held for unbelievable until 2004, namely that it might not come to a swift end due to this or that election.

After the suspension of habeaus corpus for arbitrarily designated "unlawful enemy combatants," the disavowal of the Geneva convention on torture by Democrats in the US Congress and the handover of significant police powers to the executive, everyone is now seriously worried that the United States is drifting toward outright fascism, and potentially drawing many other countries in its wake. Where does this collective nightmare spring from, and what could each of us do to transform it? How can we cease business as usual? How can we move beyond the facade of the status quo, to open up deep and widespread questions about the directions in which our societies are headed?

These are among the sobering aspects of the present. At the same time, under the pressure of these same conditions, we are all becoming increasingly conscious that we live, not just in any one country, but in a world society: a world constantly traversed by people with multiple belongings, who are acutely aware both of the interdependence of nominally independent countries, and also of the extreme fragility of the networks that link us all together. Never before has so vast a conversation and interchange been possible. What this seems to mean, in cultural and intellectual terms, is that every small meeting or working session is in reality just one temporarily active condensation of the immense and continuing process that is leading to the formation of a global public opinion and of a felt public space on a world scale, which may be called upon, in the near future, to resist the worst of what our governments and corporate power-groups are preparing. Such resistance, each time it becomes necessary, can happen only through cooperative events whose contours and distributed intelligence we ourselves will have to invent. And what this means, in turn, is that what we say and do in such small meetings has more meaning and import than we are led to believe by the careerist and consumerist norms that have taken over the mediated surface of political spectacle.

Is it possible to fulfill a responsibility to the world conversation? Even in New York City at the heart of the financial district? We are organizing another session of Continental Drift because we believe it can have positive consequences, particularly in the arenas of art and activism that link most of us together. What we need is for everyone who participates to take some small, self-assigned and untabulated responsibility for the practical unfolding of the event as it happens, and above all, to prepare in advance the expression of a certain number of inquiries, activities or concerns, along with a readiness to listen to what all the others have prepared. We are organizing a "program" of contributions, as before; but experience shows that the program is only activated and made useful by the multiple proposals that undercut it, overarch it and generally loosen the collective tongue, feed the intellect and imaginary. The theme is "articulating the cracks." We have to find ways to make our activities more resonant. The shattering of old complacencies is at least an invitation to join all those who have taken the present crisis as a springboard. 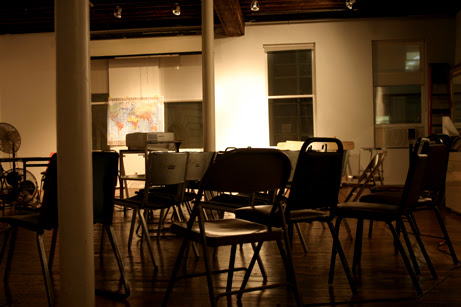 Is there such a thing as a national Skid Row? What happens when the hegemonic country goes on a multibillion-dollar binge, drinks itself blind on the fictions of power, loses control, collapses in public, hits bottom with a groan? After its first anniversary, the slow-motion blowback of Hurricane Katrina seems finally to have carried the war all the way home to the USA, water-slogged and banal, drenched in the flow of time, choking on the stupid truths that the blazing spectacle of the Twin Towers pushed outward for years, beyond unreal borders. Yes, the levees broke. Yes, the New Economy was a fitful dream. Yes, there were no WMD. Yes, the invasion of Iraq was a terrible mistake. Yes, it's not over. Yes, it takes some kind of care for others to make a world livable.

In September and October of 2005, at 16 Beaver Street in New York's financial district, the first sessions of Continental Drift tried to put together a set of lenses to examine the present condition of Empire, with its Anglo-American foundations stretching back to WWII and its normative models projected across the planet, beneath the guise of neoliberalism. We wanted to have a collective try at mapping out the world that our divided labor helps to build. But at the same time as we carried out this cartographic project, all of us struggled to see how the imperial condition inexorably cracks, along the great continental fault lines that increasingly separate the earth's major regions, but also at the heart of the very ties of belief, habit, complicity and sheer affective numbness that keep the silent majorities convinced that somewhere there is still something "normal."That was before the last war in Lebanon.

If cynicism has no bounds, if it is well known that the imperial partners will do everything they can to prove that the present mode of development is sustainable - even by destroying it - should we not have infinitely more audacity to imagine another life, and to give it expression? New York, like any huge city on planet earth in 2006, is a crossroads of worlds, an antheap of civilizations, a labyrinth of intersecting and diverging micro-experiences that resonate with the entire planetary space, no matter how far removed its deep wells and endlessly receding horizons may be. The project for this Drift is to continue mapping the operating systems of Empire, but above all, to open up the few square meters of 16 Beaver to individual or group testimonies, artistic visions and intellectual debates that can articulate - put into words, but also knit together, weave into unforeseen combinations - a number of the singular cracks that are appearing in the worlds of power: not only in the obsessively American world, but also in other worlds, in Asia, Latin America, Europe, Africa, the Middle East, the former Soviet space and in your head, where the worlds collide every day. Yes, it's another modest ambition for the calm, serene, imperturbable times in which we live.

1. First is an interview with Brian which outline some of the themes from
last year and look ahead to what he would like to present this year.

2. These are primary texts (PDFs)

The Artistic Device: Or the Articulation of Collective Speech - Brian Holmes

Pre-empting Emergence: The Biological Turn in the War on Terror - Melinda Cooper

The Limits of Multitude - Malcolm Bull

The Oppositional Device; Or, taking matters into whose hands? - Brian Holmes

For those of you who were not able to attend last year or are interested in re-visiting some of the issues that were raised we have put up a small collection of videos of decent quality (Quicktime):

A short note from first session on Transformative Cartography

Part One of evening with David Harvey on Neoliberalism

Part Two of evening with David Harvey on Neoliberalism

One of Brian's presentations

The second part of the Drift Sessions in October had a lot more discussion, this is part one of a discussion we had with Ken Wark

Part two of the discussion with Ken

We also have a lot of information on last year, so just visit last year's
website

Posted by nicholas_senn at 2:39 PM