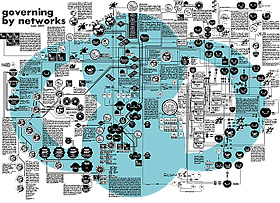 The French idiom bureau d’études is understood in English as a technical research organization, engineering firm, or design consultant. Embracing this meaning, the Paris-based team Bureau d’études officially formed in 2000, but in the late nineties began producing cartogrammes (their signature graphic diagrammatic charts that illustrate vast networks existing between international government agencies, corporate and financial firms, and industries). With an astute understanding of contemporary cultural theory, these former studio-based artists also engage in research, publication, and political activism. Fastidiously mapping out the terrain of veiled mechanisms that steer international politics and the world market, and that ultimately control global society, this collective makes the invisible visible. Through their actions, lectures, installations, and website, Bureau d’études offers this information with the belief that a truly free society is an informed one. (JM)

The Paris-based conceptual group, Bureau d'études, works intensively in two dimensions. For a recent exhibition called "Planet of the Apes" they created integrated wall charts of the ownership ties between transnational organizations, a synoptic view of the world monetary game. Against a black ground, shield-like forms are emblazoned with the names of states, regulatory bodies, think tanks, financial firms and corporations. Texts on privatization and flexibilization are posted among the circuit-like arrays. A few spots give way to blue zones, humorous and surreal, like word-balloons or psychic oceans: these hold counter-information from autonomous zones, manifestos, constitutions, calls to action....

Maps for the Outside: Bureau d'Etudes, or the Revenge of the Concept / Brian Holmes

They Rule allows you to create maps of the interlocking directories of the top companies in the US in 2004. The data was collected from their websites and SEC filings in early 2004, so it may not be completely accurate - companies merge and disappear and directors shift boards.

They Rule aims to provide a glimpse of some of the relationships of the US ruling class. It takes as its focus the boards of some of the most powerful U.S. companies, which share many of the same directors. Some individuals sit on 5, 6 or 7 of the top 500 companies. It allows users to browse through these interlocking directories and run searches on the boards and companies. A user can save a map of connections complete with their annotations and email links to these maps to others. They Rule is a starting point for research about these powerful individuals and corporations.

A few companies control much of the economy and oligopolies exert control in nearly every sector of the economy. The people who head up these companies swap on and off the boards from one company to another, and in and out of government committees and positions. These people run the most powerful institutions on the planet, and we have almost no say in who they are. This is not a conspiracy. They are proud to rule. And yet these connections of power are not always visible to the public eye.

Karl Marx once called this ruling class a 'band of hostile brothers.' They stand against each other in the competitve struggle for the continued accumulation of their capital, but they stand together as a family supporting their interests in perpetuating the profit system as whole. Protecting this system can require the cover of a 'legitimate' force - and this is the role that is played by the state. An understanding of this system can not be gleaned from looking at the inter-personal relations of this class alone, but rather how they stand in relation to other classes in society. Hopefully They Rule will raise larger questions about the structure of our society and in whose benefit it is run.

From They Rule to We Rule: Art and Activism / Josh On

Interview with Josh On How did the globalizing world of the 1990s become visible as a unified political-economic system? And what happens, when a world becomes visible?

The essay concerns what kind of commitments researchers and designers take on when they map social networks. More specifically, it takes up what may happen when social network researchers slope towards intelligence work.

Questioning the Frame: Thoughts about maps and spatial logic in the global present / Coco Fusco

Terms such as "mapping," "borders," "hacking," "trans-nationalism," "identity as spatial," and so on have been popularized in recent years by new media theories' celebration of "the networks" - a catch-all phrase for the modes of communication and exchange facilitated by the Internet.

We should proceed with caution in using this terminology because it accords strategic primacy to space and simultaneously downplays time - i.e., history. It also evades categories of embodied difference such as race, gender and class, and in doing so prevents us from understanding how the historical development of those differences has shaped our contemporary worldview.

The Future of the Reciprocal Readymade: An Essay on Use-Value and Art-Related Practice / Stephen Wright

The truth-value of fiction, particularly when wielded with humour, can be powerful indeed. But in the end, the point is to incite people to look at the real – and to do something about it. Mapping information, power and influence networks, producing flowcharts that link the often invisible, overlapping interests of technological, bureaucratic and economic power – in short, the component parts of biocracy in the era of the post-national state – has been the project of the art collective, bureau d’études over the past eight or so years....

Minima Cartographia or The Patient Becomes the Agent / Marina Vishmidt

After her active involvement in the recent Cartographic Congress at London’s Limehouse Town Hall, Marina Vishmidt was prompted to consider the problematics of contemporary cartography. With the emergence of collaborative mapping, open data systems, semantic webs and meta-mapping, the function of ‘the map’ in the information age has become as complex as the informatic topographies it rests upon.

Mapping Contemporary Capitalism (McC) is a long term software development project with the goal of creating a tool for collaborative mapping of power relations. The Software will enable groups to share their data, and then plot the interconnections between organisations, political entities, corporations, and individuals that constitute society.

MigMap conveys a picture of how and where the production of knowledge is currently taking place in the area of migration – and of who is participating in and has access to it. MigMap investigates precisely how the new forms of supranational governance that can be observed in the European migration regime function. It looks, for example, at how European standards in politics and civil society are implemented, and at the authorities, persons and institutions taking part in this process. It examines how the various key players in the public and private spheres are interrelated and funded, as well as at the ways in which these spheres overlap or differ in terms of focus, location or personnel. Finally, it analyses how responsibilities are allocated and legitimised – and explores the theories, data and discourses upon which current paradigms in migration are based.

[./logicaland] is a project study for visualizing our world's complex economical, political and social systems. [./logicaland] tries to engage people into strategies of raising human sensibility and responsibility within the global networked society. the challenge is to develop ideas, tools and visualizations that fit the requirements of complex correlating systems and our world's complex participative environment...

The Hierarchies Project: Who Owns Who?

Our aim is to track the relationships among people, corporations, their brands, and the effects these structures have on the world.

What do university students, knowledge workers, factory farmers and migrant workers have in common? How is a university like a factory farm? What is Biopower? Why should you give a moo about poo? This map traces connections between different cultures of technology that are part of the apparatus of Biopower. Biopower is a form of power that regulates "the production and reproduction of life itself."

This Cultures of Technology Map is part of BIOPOWER UNLIMITED! a subRosa tactical media project. Presented at Bowling Green State University as part of Ghosts in the Wiring, New Music & Art Festival 23, October 16-19, 2002

Marked on a piece of a map of Buenos Aires (an area along the heavily polluted river Riachuelo): centers of economic power, acts of military repression, places of warlike conflicts, militarized zones, US military bases.

Govcom.org is an Amsterdam-based foundation dedicated to creating and hosting political tools on the Web. Much of the work involves mapping issue networks on the Web, using the Issue Crawler software, where one now may auto-request an account.

The Open Government Information Awareness suite of software tools acts as a framework for US citizens to construct and analyze a comprehensive database on our government. Modeled on recent government programs designed to consolidate information on individuals into massive databases, our system does the opposite, allowing you to scrutinize those in government. Citizens are able to explore data, track events, find patterns, and build risk profiles, all in an effort to encourage and motivate action. We like to think of it as a Citizen’s Intelligence Agency, giving people similar tools and technologies to those held by their government.

The first map, "What is the Prison Industrial Complex?", maps out the relationship between the many forces which profit from and influence prison growth and criminalization. The second map, "What is the Complex for Today's PIC?", maps the historical change from the Welfare State to a new security state in which the state's function has been reduced to one of force, apprehension and detention. Both are lend abstract visual representations to forces and things that can't be represented in a photograph or through video, giving an understandable form to the complex workings of a growing and dispersed system.

"A WORLD MAP: in which we see..." is a conceptual mapping project about globalization, its processes and forces. Mapping concepts and discourses rather specific geographies, it traces how, as a supra-national system of economies, laws and institutions, globalization builds itself upon the exclusion of certain persons and how prisoners and refugees, by rendering them "without rights," are then used to fill these excluded positions.

Garbage Problems examines the state of waste management in New York City in the wake of the closing of the Fresh Kills landfill on Staten Island. For fifty years, most of New York City’s solid waste found its final resting place at Fresh Kills. When Mayor Giuliani announced the landfill’s closure on March 22, 2001, it marked the tipping point of what will become one of the most major changes to New York’s infrastructure since World War II. Where will all the garbage go?

To answer this question, CUP joined up with eight students from City-as-School to make sense of the situation. We interviewed garbage experts, workers, and activists. We visited important garbage sites like Waste Transfer Stations in the South Bronx. We studied garbage infrastructure, like boats and incinerators. After all that, we produced a 30-minute video, four educational posters, and a speculative design for the reuse of the landfill.