Disappeared in America / The VISIBLE Collective

DISAPPEARED is a project by the Visible Collective/Naeem Mohaiemen that uses films, installations, & lectures to trace migration impulses, hyphenated identities and post-9/11 security panic. The majority of migrants detained in recent security hysteria were from the invisible underclass of cities like New York. They are the recent immigrants who drive our taxis, deliver our food, clean our restaurant tables, and sell fruit, coffee, and newspapers. The only time we "see" them is when we glance at the hack license in the taxi partition, or the ID card around the neck of a vendor.

The detained are usually men, in various states of "illegal" status, easily dismissed as "law breakers." Finally, when deported, they cease to exist in the American consciousness. This desire to create a sinister outsider with dubious "loyalty" has a long, vicious pedigree, witness the 1919 detention of 10,000 immigrants after anarchists bombed the Attorney General's home; the 1941 internment of 110,000 Japanese-Americans; the COINTELPRO infiltration of Black Panthers; the harrassment of Deacons For Defense; the trial and execution of the Rosenbergs; and the HUAC "red scare" under Senator McCarthy. 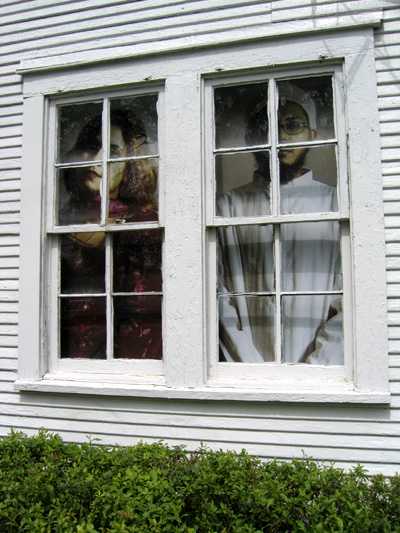 Taking a cue from an election speech, this animation outlines the regions where mass detentions were carried out after 9/11. This map is built off a database that viewers can update.

Then Things Piled Up

This interactive timeline connects post-9/11 events, laws, detainees, and personalities in a spider-leg mosaic of clarity, complexity and maybe even obscurity....

In this series of interviews, you can hear detainees and their family members talk about their experiences. These interviews form part of the DISAPPEARED IN AMERICA installation, which was on view (February 27–June 5, 2005) at the Queens Museum of Art. 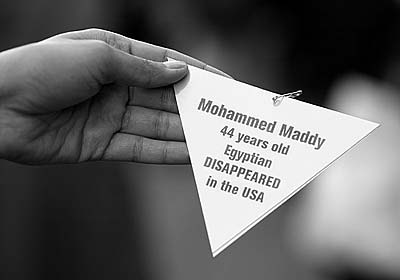 VISIBLE is an arts collective whose work questions and challenges ideas, theory and image in the post 9/11 "war on terror". This work complements the legal activism of groups like ACLU, Center for Constitutional Rights and Not In Our Name. DISAPPEARED IN AMERICA uses art in a museum space to deconstruct a global climate of Islamophobia.

Peer Pleasure 2 continues our exploration of artist group activity and showcases projects by a whole new set of artist groups working in the U.S. and abroad. Each of the Peer Pleasure 2 projects reflects an interest in forging community networks to distribute art, information and ideas. Interactive projects by Red 76 (Portland and Chicago), Temporary Services (Chicago) and Visible Collective (New York), address a broad range of social and political issues, from life in the prison system, to the misrepresentation of Muslims in the media. Over the course of the exhibition, YBCA’s galleries will be animated with interactive displays, impromptu lectures, and unique off-site public events organized by members of each collective.
Posted by nicholas_senn at 10:06 PM