Experimental Geography: From Cultural Production to the Production of Space 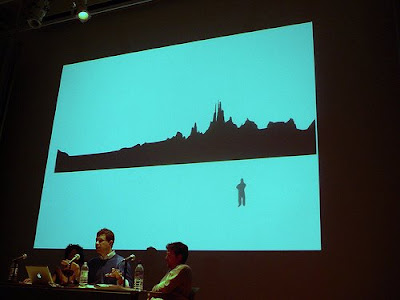 Experimental Geography: From Cultural Production to the Production of Space / Trevor Paglen / The Brooklyn Rail

When most people think about geography, they think about maps. Lots of maps. Maps with state capitals and national territories, maps showing mountains and rivers, forests and lakes, or maps showing population distributions and migration patterns. And indeed, that isn’t a wholly inaccurate idea of what the field is all about. It is true that modern geography and mapmaking were once inseparable.

Renaissance geographers like Henricus Martellus Germanus and Pedro Reinel, having rediscovered Greek texts on geography (most importantly Ptolemy’s Geography), put the ancient knowledge to work in the service of the Spanish and Portuguese empires. Martellus’s maps from the late 15th Century updated the old Greek cartographic projections to include Marco Polo’s explorations of the East as well as Portuguese forays along the African coast. Reinel’s portolan maps are some of the oldest modern nautical charts. Cartography, it turned out, was an indispensable tool for imperial expansion: if new territories were to be controlled, they had to be mapped. Within a few decades, royal cartographers filled in blank spots on old maps. In 1500, Juan de la Cosa, who accompanied Columbus on three voyages as captain of the Santa Maria, produced the Mappa Mundi, the first known map to depict the New World. Geography was such an important instrument of Portuguese and Spanish colonialism that early modern maps were some of these empires’ greatest secrets. Anyone caught leaking a map to a foreign power could be punished by death.

In our own time, another cartographic renaissance is taking place. In popular culture, free software applications like Google Earth and MapQuest have become almost indispensable parts of our everyday lives: we use online mapping applications to get directions to unfamiliar addresses and to virtually “explore” the globe with the aid of publicly available satellite imagery. Consumer-available global positioning systems (GPS) have made latitude and longitude coordinates a part of the cultural vernacular. In the arts, legions of cultural producers have been exercising the power to map. Gallery and museum exhibitions are dedicated to every variety of creative cartography; “locative media” has emerged as a form of techno-site-specificity; in the antiquities market, old maps have come to command historically unprecedented prices at auction. Academia, too, has been seized by the new powers of mapmaking: geographical information systems (GIS) have become a new lingua franca for collecting, collating, and representing data in fields as diverse as archaeology, biology, climatology, demography, epidemiology, and all the way to zoology. In many people’s minds, a newfound interest in geography has seized popular culture, the arts, and the academy. But does the proliferation of mapping technologies and practices really point to a new geographic cultural a priori? Not necessarily. Although geography and cartography have common intellectual and practical ancestors, and are often located within the same departments at universities, they can suggest very different ways of seeing and understanding the world.

Contemporary geography has little more than a cursory relationship to all varieties of cartography. In fact, most critical geographers have a healthy skepticism for the “God’s-Eye” vantage points implicit in much cartographic practice. As useful as maps can be, they can only provide very rough guides to what constitutes a particular space.

Geography is a curiously and powerfully transdisciplinary discipline. In any given geography department, one is likely to find people studying everything from the pre-Holocene atmospheric chemistry of northern Greenland to the effects of sovereign wealth funds on Hong Kong real estate markets, and from methyl chloride emissions in coastal salt marshes to the racial politics of nineteenth-century California labor movements. In the postwar United States, university officials routinely equated the discipline’s lack of systematic methodological and discursive norms with a lack of seriousness and rigor, a perception that led to numerous departments being closed for lack of institutional support. The end of geography at Harvard was typical of what happened to the field: university officials shut down its geography department in 1948, as CUNY geographer Neil Smith tells it, after being flummoxed by their “inability to extract a clear definition of the subject, to grasp the substance of geography, or to determine its boundaries with other disciplines.” The academic brass “saw the field as hopelessly amorphous.” But this “hopeless amorphousness” is, in fact, the discipline’s greatest strength.

No matter how diverse and transdisciplinary the field of geography may seem, and indeed is, a couple of axioms nevertheless unify the vast majority of contemporary geographers’ work. These axioms hold as true for the “hard science” in university laboratories as for human geographers studying the unpredictable workings of culture and society. Geography’s major theoretical underpinnings come from two related ideas: materialism and the production of space.

In the philosophical tradition, materialism is the simple idea that the world is made out of “stuff,” and that moreover, the world is only made out of “stuff.” All phenomena, then, from atmospheric dynamics to Jackson Pollock paintings, arise out of the interactions of material in the world. In the western tradition, philosophical materialism goes back to ancient Greek philosophers like Democritus, Anaxagoras, and Epicurus, whose conceptions of reality differed sharply from Plato’s metaphysics. Later philosophers like Thomas Hobbes, David Hume, Ludwig Feuerbach, and Karl Marx would develop materialist philosophies in contradistinction to Cartesian dualism and German idealism. Methodologically, materialism suggests an empirical (although not necessarily positivistic) approach to understanding the world. In the contemporary intellectual climate, a materialist approach takes relationality for granted, but an analytic approach that insists on “stuff” can be a powerful way of circumventing or tempering the quasi-solipsistic tendencies found in some strains of vulgar poststructuralism.

Geography’s second overarching axiom has to do with what we generally call “the production of space.” Although the idea of the “production of space” is usually attributed to the geographer-philosopher Henri Lefebvre, whose 1974 book La Production de l’Espace introduced the term to large numbers of people, the ideas animating Lefebvre’s work have a much longer history.Like materialism, the production of space is a relatively easy, even obvious, idea, but it has profoundimplications. In a nutshell, the production of space says that humans create the world around them and that humans are, in turn, created by the world around them. In other words, the human condition is characterized by a feedback loop between human activity and our material surroundings. In this view, space is not a container for human activities to take place within, but is actively “produced” through human activity. The spaces humans produce, in turn, set powerful constraints upon subsequent activity.

To illustrate this idea, we can take the university where I’m presently writing this text. At first blush, the university might seem like little more than a collection of buildings: libraries, laboratories, and classrooms with distinct locations in space. That’s what the university looks like on a map or on Google Earth. But this is an exceptionally partial view of the institution. The university is not an inert thing: it doesn’t “happen” until students arrive to attend classes, professors lock themselves away to do research, administrative staff pays the bills and registers the students, state legislators appropriate money for campus operations, and maintenance crews keep the institution’s physical infrastructure from falling apart. The university, then, cannot be separated from the people who go about “producing” the institution day after day. But the university also sculpts human activity: the university’s physical and bureaucratic structure creates conditions under which students attend lectures, read books, write papers, participate in discussions, and get grades. Human activity produces the university, but human activities are, in turn, shaped by the university. In these feedback loops, we see production of space at work.

Place Matters / Against the Grain