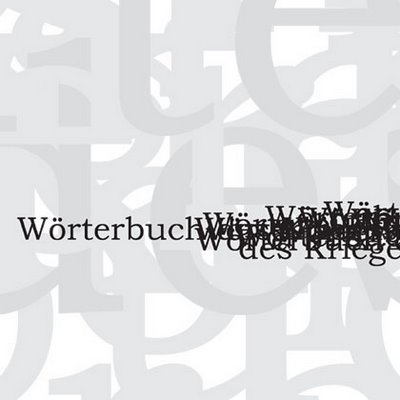 "At least, when we create concepts, we are doing something"

DICTIONARY OF WAR is a collaborative platform for creating 100 concepts on the issue of war, to be invented, arranged and presented by scientists, artists, theorists and activists at four public, two-day events in Frankfurt, Munich, Graz and Berlin. The aim is to create key concepts that either play a significant role in current discussions of war, have so far been neglected, or have yet to be created.

DICTIONARY OF WAR is about polemics in various respects: It seeks confrontation with a reality that is characterised by the concealment of power relations the more that one talks about war and peace. But it is also about finding out to what extent war may function as an “analyzer of power relations” that constitutes current changes.

Changes that have been producing ever new wordings: The new war, post-modern war, global war, immanent war - all sorts of labels that indicate that the juridical model of sovereignty would seem to have had its day: war as an armed confrontation between sovereign nation states is a thing of the past.

While this still refers to conflict between different interest groups that are defined by the degree of their intensity and extension, unlike in the past war serves to regulate rather than destroy or renew existing power relations.

War is a “constitutive form of a new order” that no longer knows an inside or outside, that not only destroys but also produces life. In this new world order there is no difference between war and non-war: war is perpetual and everywhere.

So like so many things, war too seems to be subject to a deregulation process that radically challenges old certainties. DICTIONARY OF WAR sets out to oppose war and, at the same time, calls for "desertion" from a war of words in which facts are created with such force in their communication and propaganda that they can no longer be challenged.

“At least, when we create concepts, we are doing something.” The idea of DICTIONARY OF WAR, then, begins by referring to the theory of creating concepts proposed by Deleuze and Guattari: Concepts must be invented, created, produced; concepts refer to problems without which they would be meaningless. It is not about definitions, anecdotes, original opinions or entertainment, but rather about developing the tools with which to attain new ideas.

The concepts are created by conceptual personae, who are not identical to the author, philosopher, artist self, but rather testify to a third person beneath or beside. According to Deleuze and Guattari, “we do not do something by saying it but produce movement by thinking it, through the intermediary of a conceptual persona”.

DICTIONARY OF WAR is not a book in the proper sense. It is not about texts, deadlines or editing but about performativity. The concepts are introduced in alphabetical order by their conceptual personae in twenty-minute presentations.

There are no restrictions with regard to format. DICTIONARY OF WAR will be composed of lectures, choreographies, films, slide shows, readings or whatever format authors, actors, organisers and conceptual personae choose to use.

Finally, DICTIONARY OF WAR may well be a kind of war machine itself: the concepts are not intended to be deployed as means of control that regulate meanings, but which rather activate developments and processes and evoke events. “To draw speech to oneself and bring something incomprehensible into the world.” (Kleist)

DICTIONARY OF WAR consists of a stringent concept on three levels:

All created concepts will be documented. Two video cameras and a video mixer will be available for this throughout the events. The aim of the documentation is to make the lectures available on the Internet, and as such accountable and reproducable beyond the actual event. The documentation is explicitly not about creating another independent artistic contribution. However, such contributions may of course be submitted as supplements or additional material. If possible, the conceptual personae are asked to provide their manuscript. The documentation may also feature additional material exceeding the twenty-minute time-frame. The video recordings of the presentations will be published under a creative commons licence on the Web shortly after the events. They will thus be available as material for ongoing editing, comment and discussion, although, of course, always referring back to the original contribution and its conceptual persona.

Following the four DICTIONARY OF WAR events, a book will be published by Merve-Verlag, Berlin, to present the 100 concepts, appropriately adapted by the author where necessary, in printed form. Posted by nicholas_senn at 8:53 AM