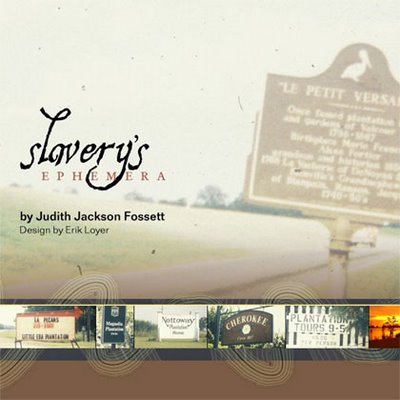 Nearly 150 years after the height of the plantation South, the presumed ‘romance’ of the era still seems to hold sway in the American national imaginary. Tourism at plantation sites has surged in recent years. The visitor to these locales surveys a very particular past, for tour guides typically focus on architectural spectacle and period furnishings as they sketch a specific (and usually white-washed) history of ephemeral southern grandeur. The visiting tourist is powerfully positioned within a mise-en-scene of imagined hospitality, an immersive experience underwritten both by the mansions’ scale and lush settings and by the simultaneous erasure of virtually all traces of slavery. The visitor is swept into a stage set ripe for fantasy, creating a powerful scene for the projection of romance and structuring a sort of mobility through an imagined space of history. This fantasy unfolds in an isolated temporal and geographic zone, narrativized as separate in space and time, a lost moment reflecting a ‘gentler’ past that mustn’t be disturbed by the ghostly presence of the slave. These tours serve to freeze the possible meanings of the South, the plantation, and the past along very narrow registers.

Slavery’s Ephemera pries open these affective registers and powerfully insists that the plantation be reanimated via its many complex, embedded, and embodied histories. Designed as a companion piece to Judith Jackson Fossett’s book manuscript on the lingering presence of the plantation today, the project reflects upon and recombines the results of three extensive research trips to antebellum sites in southern Louisiana. In authoring an 'alternative narrative' of plantation geographies and architectures, Fossett, working with Erik Loyer, also crafts an alternative immersive experience. The tour they construct refuses the neat linearity and simple closures that dominate the experience of the traditional plantation tour. As you explore the piece, you are not led through a carefully orchestrated narrative along a lovely landscaped path. Rather, you encounter various sites, artifacts, and images that seemingly float free of one place or one time. Juxtaposition and layering replace linear history, highlighting the ephemeral status of our encounters with slavery’s remnants as well as the ideological stakes of tourist history.

What’s to be gained by the modes of collision such an experimental format underwrites? Interacting with the piece sets in motion a number of elements: key words flow down the river, jamming up at various points while sometimes racing away from the inquisitive cursor; provocative phrases fade in and out of sight; images overlay the terrain. The parts never coalesce into a neat whole; a nostalgic plantation image abuts a chemical plant; tourist souvenirs bump up against histories of oppression; real estate ads meet academic prose. As such, Slavery’s Ephemera replays at the experiential level the schizophrenia that so characterizes American sentiments about the South. The region has long served as a screen upon which we project various fears, hopes, and fantasies. This project refuses to fix the meaning of the South in a single moment or image while also underscoring the many things the region can still teach us. For Fossett, the material and ephemeral culture of the South have much to tell us about the nation and the world. 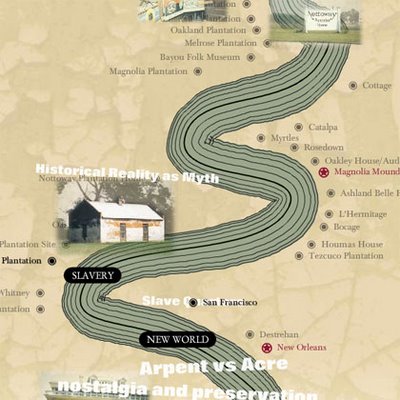 Judith Jackson Fossett teaches English and American Studies & Ethnicity at the University of Southern California. She is a cultural historian of slavery in the Americas. She has just completed Illuminated Darkness: Slavery and its Shadows in 19th-century America, a literary history of rhetorical forms in the wake of slavery. "Slavery's Ephemera" comes from a larger book project, Structures of Slavery: The Plantation in the New World Imagination. In addition to these scholarly endeavors, Jackson Fossett has also been intensely engages in bringing multimedia authoring and argumentation into the classroom, especially with regard to the African-American and American Studies curriculum.

Throughout numerous visits to the remnants of New World slavery in Plantation Country in the Lower Mississippi Valley of southern Louisiana, this refrain was repeated so often by all I met—whether black, white, creole, affluent or destitute—as to make me wonder about my solidity. Was I some tourist who flitted through these overwrought landscapes like a ghost? Could my presence—as a black woman, without local accent—be tolerated at the remains of plantation complexes and plantation sites only if I was discursively placed as not being “from ‘round here”?

... This issue of Vectors is not intended as a celebration of ephemerality, but rather a gesture of respect for the fleeting nature of the present and the material consequences of the past. Historical investigations, as Carlo Ginzburg argues, are sometimes most productive when they look for meaning in the least likely places. Each of the projects in this issue attempts to take seriously the significance of cultural artifacts that would otherwise be forgotten or overwhelmed by more official documents and discourses of history. The voices that reach us via things that were meant to be forgotten may in fact speak most eloquently to the imperatives and contradictions of our present historical moment. It is with equal degrees of irony and hopefulness that we present these works of excavation, rumination and preservation in a form that will soon confront its own likely disappearance.
Posted by nicholas_senn at 8:31 PM