Excerpts from a recent presentation at the annual meeting of the Association of American Geographers in Chicago. The presentation was part of a panel ("The Performative and the Political") organized by Allan Pred and Derek Gregory....

As we speak, Dennis Banks is leading a group of runners across the country. Sacred Run 2006 commenced on San Francisco’s Alcatraz Island at sunrise on February 11th and will arrive in Washington D.C. on Earth Day, April 22nd. The runners are carrying a message of peace, opposition to the war in Iraq, and support for those most affected by Hurricanes Katrina and Rita. Today they are near Perkins, Oklahoma....

As we speak, a fat man is walking across the country to, as he says, "lose weight and regain my life." Steve Vaught began walking from his home in Oceanside, California on April 10th 2005 and expects to arrive in New York City sometime this summer. Today he is near Dayton, Ohio....

In two days, on the seventy-sixth anniversary of "The Salt March," Fernando Suarez Del Solar will begin walking from Tijuana, Mexico to the Mission District of San Francisco. The 241-mile "March for Peace" – traveling by way of Camp Pendleton Marine Corps Base and the Cesar Chavez burial site in La Paz, California – aims to ensure that the Latino voice of opposition to the War in Iraq is heard loud and clear across the Americas. Fernando is the father of Jesus, one of the first Latinos to die in Iraq when he accidentally stepped on an illegal US cluster bomb on March 27th 2003, seven days after the start of the invasion....

I offer this as a way of situating my comments within a larger and more politicized context and also to foreground questions of relevance – questions of the sort that have recently been asked, in a geographical context, by Don Mitchell and Lynn Staeheli in their essay "The Complex Politics of Relevance in Geography," and also by Ruth Wilson Gilmore and Derek Gregory in their contributions to "The Role of Geography in Public Debate."

Today, I’d like to talk about two projects - a symposium and an art exhibition - which I helped organize this past year while a graduate student at the University of Illinois at Urbana-Champaign. Both projects deal in part with walking – the potential and the limitations of walking as a way of constructing and contesting place. Before describing these projects in greater detail, I want to further position this presentation within the context of critical methodologies. That is to say, I want to talk specifically about how these projects were designed – about how our design choices were, in turn, informed by questions of relevance. In short, a consideration of how form relates to function, and how means relate to ends....

Last September 11th a group of researchers, activists and media-artists gathered in Moscow for a conference, "Capturing the Moving Mind," organized by a group affiliated with the online journal Ephemera: Theory and Politics in Organization. The stated purpose of the conference was to explore the new logics of economics, the war against terror and cooperative modes of creation and resistance. 50 participants spent the next ten days traveling trough 9 time zones, from Moscow to Beijing aboard the Trans-Siberian train. Materials generated en route – discussions, interviews, texts and films – were distributed in real-time via the Internet. The "Trans-Siberian Radio Project," a low power FM radio station, a mobile lab for on-air experimentation, featured music and ideas created collaboratively by passengers on the train and accessible to everyone along the train’s path. One of the organizers, Natilee Harren, said: "The spirit of the conference is to cross fixed boundaries and to create an environment that is open to the contaminating influences of the communities through which the train will pass. In fact, the point of having the conference on a train is to escape any restrictions relating to a particular time or place." 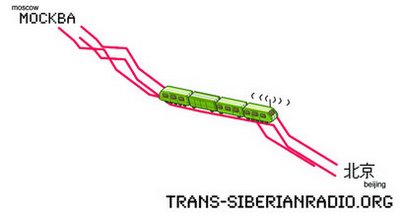 "Capturing the Moving Mind" may be an extreme example, and it’s not an unproblematic one, but it does effectively raise questions about methodology. This mobile conference can be counter-posed with other, slightly more orthodox gatherings such as "CICIVCentre: Reclaiming the Right to Performance," a week-long symposium in London in April 2003 that explored the relationship between contemporary performance, civic dialogue and political intervention. Another good example is "Points of Contact - Performance, Places and Pasts," organized by the Centre for Performance Research in Wales in September 1998. This four-day event, which included two full-day field-trips, brought together Welsh performance practitioners whose work is concerned with notions of place and identity with other international artists and scholars from a variety of disciplines. In fact, there are numerous examples of this sort of methodological experimentation – the most innovative of which often lack institutional affiliation....

A recent online discussion facilitated by the Institute for Distributed Creativity – an international group that focuses on collaboration in media art, technology, and theory with an emphasis on social contexts – has likewise pursued questions about the design and format of conferences and festivals. Discussion participants engaged in a nuanced critique of, what they referred to as, "panelism" – the traditional format of conferences that are structured around panels, 20-minute time-slots, and the keynote address. The critique did not suggest that traditional formats are inherently unproductive – that they must be abandoned – but rather that they need to be more self-reflexive and open to experimentation and alternative structures….

Implicit in this critique is recognition of the relationship between form and function and a call for greater accountability between the two. It builds on ideas that Walter Benjamin identified in his essay "The Author as Producer" – his insistence that we, as producers, concern ourselves equally with means and ends:

"An author who has carefully thought about the conditions of production today... will never be concerned with the products alone, but always, at the same time, with the means of production. In other words, his products must possess an organizing function besides and before their character as finished works."

I’m very interested in how these questions about relevance inform subsequent decisions about the "organizing function" and how this discourse can potentially lead to a more strategic and critical methodology within a variety of different contexts – one that is more responsible to the means of production in which it operates. 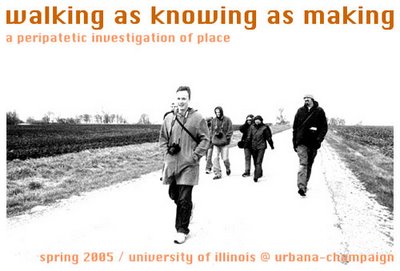 With this in mind, we organized the symposium (Walking as Knowing as Making) and the exhibition (Urban/Rural/Wild) as a means to investigate place as both a concept and a material reality – to facilitate an accessible yet critical reading of the landscape, and to engage in a simultaneous decoding and recoding of space. Both events employed a variety of different interpretive strategies to activate specific aspects of our local history and politics and to interrogate our formulations of place in general. In other words, we sought to articulate a provisional assessment of place that would be consistent with W.J.T Mitchell’s assertion that "[a]n account of landscape has to trace the process by which landscape effaces its own readability and naturalizes itself.”

How do we know a place? How do we facilitate a conversation about place? These two questions were central in the development of the symposium and the exhibition. Beyond simply facilitating a dialogue – or presuming to start one where none previously existed – both projects attempted to tap into fragments of existing dialogue and to reveal the potential for cross-pollination and collaboration. Furthermore, both projects attempted to move beyond dialogue and to directly engage in acts of critical spatial practice - a term coined by the architectural historian Jane Rendell to describe the point of convergence between critical theory and spatial practice.... 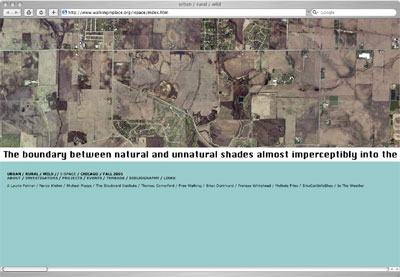 Tinkering with format aside, in the end, a symposium is still just a symposium; an exhibition still just an exhibition. As theorized, walking and place are still relatively abstract and not much is immediately at stake. These forms of cultural production must not be confused with the sort of "on the ground" organizing work that possesses true political efficacy. Certainly these efforts can be a part of that ongoing struggle. But they can’t be a substitute, at least not an effective one. It’s our responsibility as organizers and producers to connect with communities and individuals who will continue doing the "real work" long after the exhibition comes down and the symposium ends. Or better yet we can do some of that work ourselves....

A growing collection of links about various conferences & festivals that have given serious thought to questions of design, format, and methodology....

The Trans-Siberian journey "Capturing the Moving Mind/Management and Movement in the Age of Permanently Temporary War" brought together 40 selected artists, activists, mathematicians, economists, sociologists and musicians on a ten-day train ride from Moscow to Novosibirsk (the largest city in Siberia) to Beijing. The project was an experiment in cohabitating in a spatially altered "moving" environment, passing from West to East across a magnificent landscape as the group discussed the state of our violently temporal world. Among the 40 artists aboard the trans-Siberian train were Gwylène Gallimard and Jean-Marie Mauclet, two community-based artists living in Charleston, S.C. They brought with them their current project, called "The Future Is on the Table," which is based in communities all around the world. They were interviewed about the journey for this article.
Posted by nicholas_senn at 6:07 PM