The Privatization of War 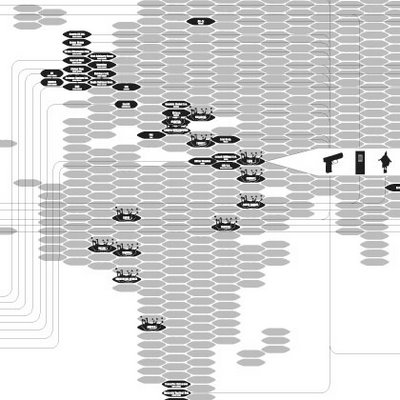 The Privatization of War:
Colombia as Laboratory and Iraq as Large-Scale Application

A mapping project by Lize Mogel and Dario Azzellini

Commissioned for the Gwangju Biennial, this collaboration between artist Lize Mogel and writer Dario Azzellini diagrams the relationships between the United States and private military contractors (PMCs); and their activities in Columbia and Iraq. These nations are two key sites that exemplify PMC operation in the new world order.

The privatization of military services is a worldwide business worth $200 billion a year. PMCs are an enormous part of this economy, offering "products" from logistics (such as building and managing military camps and prisons) to strategic support (radar and surveillance) to open combat and special sabotage missions. PMC corporations are based globally, and recruit heavily in the global south. 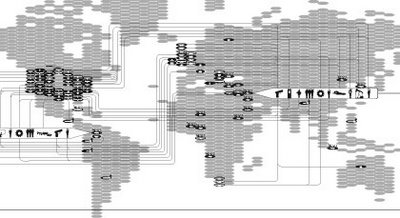 Lize Mogel is an artist working with geography and cartography. Her projects, often site-specific and distributed in public space, use the map as political agent. She is interviewed by artist and geographer Trevor Paglen.

Trevor Paglen: How did you come to work on your most recent project, which is about mapping the corporate structure of this new age of global war?

Lize Mogel: "The Privatization of War: Colombia as Laboratory and Iraq as Large-Scale Application" was originally commissioned by Cira Pascual-Marquina and Chris Gilbert for the Gwangju Biennial in South Korea. It diagrams the relationships between the United States and private military contractors (PMCs); and their activities in Colombia and Iraq. This was a sort of "blind date" collaboration - where Cira/Chris emailed me and asked if I wanted to do a mapping project with writer/researcher Dario Azzellini who had done a large amount of work on the "business of war" (while I had been involved in some research on American military interests while working with the Center for Land Use Interpretation). It was a somewhat globalized project - I’m in NYC, Cira and Chris live in Venezuela, Dario is in Berlin, and the show is in South Korea - and the project itself is about global flows, centered on Iraq and Colombia.... [continue]

artwurl.org is a non-profit webzine - project of PS122 Gallery, New York - that aims to provide a space for conversation, practice and research of contemporary critical, conceptual and political art.

Mapquest brings together work by artists, activists, writers and organizers, involved in experimentation with critical and dissident cartography. The exhibition examines various mapping strategies employed as response to specific social and political issues. Working not unlike investigative journalists, some participants conduct and map in-depth research of themes such as the functioning of private military contractors or recruitment centers. Others design maps as tools, featuring information that can be used to support for social action. In a similar vein they employ mapping strategies to produce alternative knowledge about networks of power and control in urban spaces.

Posted by nicholas_senn at 1:18 PM