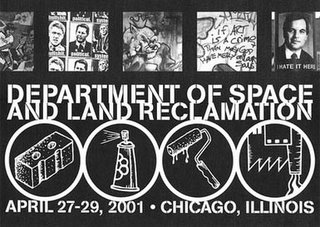 The Department of Space and Land Reclamation was a weekend long blitz of cultural production in public space. We created a "hub" at a local alternative arts space, the Butcher Shop, and made it into a 24 hour a day convegence space for people to meet, hang out, eat, sleep, party, and create projects to unleash on the Chicago. Our goals were twofold: first, by acting out in public in as many diverse ways as possible, we hoped to make visible the fact that every square inch of urban space has been consciously planned on some level to make us think or behave in a certain way. Space created as a way to get to and from work was transformed into a site of play, space created to sell us products became a canvas for self-expression. Second, we wanted to bring together a very diverse group of artists, activists, and community organizers and get them to think about how they can learn from the ideas and styles of each other and how public cultural practice can positively effect what they do and how they do it....

The Department of Space and Land Reclamation originated in Chicago in the Spring of 2001. Taking place at a collective print shop over the course of a 72-hour weekend, DSLR unleashed over fifty-nine reclamation projects into the heart of the windy city. Although 2001 was not so long ago, the political climate definitely had a different temperature to it. A year and a half after the historic battle in Seattle against the World Trade Organization, the period was rich with a desire for new forms of agitation. While DSLR was spearheaded by Josh MacPhee, Emily Forman and myself, its fruition was the result of many hundred disaffected Chicagoans; and that was particularly the point. Unlike art exhibitions where a select few projects are highlighted, we wanted a massive social uprising. Scale and participation outpaced any desire to glorify singular practices. We wanted to produce a ground-breaking social catalyst.

Each of us came from a grassroots organizing background and were interested in combining activist campaign models with those of some of the more radical forms of public art. Under the label 'reclamation' we united such disparate practices as pirate radio, sidewalk poetry readings, surreal public performance, kissing marathons, guerrilla gardening, and even general strikes. The range of projects each resisted the privatization and control of public space in their own charming way.

However, the public projects were only one facet of the campaign. From a central hub, DSLR operated as an ad-hoc social space where groups from varying communities in Chicago could get to know each other. With free food, couches, and good music, the hub became the space where the real long-lasting social connections derived. The campaign's ultimate goal was to strengthen the ties in the disparate socially conscious communities of Chicago. And the power of ambiguous aesthetics and reclamation provided a conducive atmosphere for cutting through the strange boundaries between radical communities. People enjoyed cooking, eating, hanging out and producing together. Suddenly, we realized we had produced a model that worked outside the typical art exhibition and street protest. Something unique, anti-capitalist, and anti-authoritarian was happening and we did not want this lesson lost. The model worked!

DSLR was developed specifically for the needs of Chicago. With that in mind, it is absolutely fantastic to see the project tweaked and refined to fit the needs of different urban settings such as San Francisco (DSLR West) and now Los Angeles. It is interesting to watch October Surprise consider the sprawling nature of the area into their design. With such an inspiring and vibrant radical community burgeoning in the heart of Southern California, DSLR should provide a tremendous shot of adrenaline. I would like to offer one lesson we learned from DSLR Chicago as something to bare in mind. October Surprise will provide a powerful range of opportunities for organizing for everyone involved. The trick is to not let that window shut before you have taken advantage of it. Be aware of the new communities that are possible and find tangible methods for building on them. Don't burn out. Keep the momentum going and pass the torch on to another radical community. To the barricades!

Los Angeles is made up of a collection of diverse neighborhoods, each delineated by various physical and social geographies, and tenuously connected by a complex of shared economies, cultures, and desires. East of the LA River, stretching up along Figueroa Avenue and the Arroyo Seco, Highland Park is girded by Mount Washington, Montecito Heights, Glassel Park and Eagle Rock. Highland Park is but one town among many that could be called home. This section of Northeast Los Angeles will be home to the series of events documented in these pages, and include the efforts of artists, activists, and citizens concerned with the local manifestation of culture, politics, history and ecology.

While all kinds of efforts related to the upcoming national election are being mobilized, there are forms of political life necessarily neglected by the generalizations of party politics. Nearly every space in our life demands dealing creatively with poor urban planning, bad schools, privatized histories.... Yet we are encouraged to become global drifters instead - just more consumers wearing Hard Rock Café T-shirts from Bangkok, Paris or Disneyland. The aftermath of November will certainly impact us all, but the micro politics that exist on our streets have their own life and possibilities.

To explore some of these possibilities, October Surprise has created a space for site-specific installations and interventions that recognize THIS place as our home, revealing and celebrating the past, present and possible futures of Northeast LA. We Angelinos are brash, resilient and far more resourceful than we get credit for. We believe that this sort of grassroots action will allow Highland Park to diverge from the social patterns that define other gentrifying cities of today. In other parts of the country, land, history, political leverage and possibility disappears behind the need for speculative economic growth. To this, we say, “This is OUR city, let’s live in it!”

In late 2004, the Chicago Housing Authority (CHA) initiated a public relations campaign to put a new face on their Plan For Transformation, a plan that drastically reshapes the state of public housing in Chicago.

This PR campaign, authored by the advertising giant Leo Burnett, fused Chicago Housing Authority's acronym ‘CHA’ with the word ‘change’, resulting in a new brand identity: CHAnge. There are undoubtedly big changes happening with public housing in Chicago, including massive organizational restructuring within CHA and the tearing down of all high-rise public housing buildings....

The Pioneer Renewal Trust is a hoax real estate agency that is used in projects which serve to highlight gentrification and housing issues in Chicago. Our first project was a show in a residential home gallery located in a in a rapidly gentrifying neighborhood. We initially offered the gallery up for sale in a straightforward way, with signs and flyers. As the show progressed, the signs, flyers, and interior of the gallery became more absurd, as we proposed to build a series of super-luxury condos inside the house. PRT also hosted a public forum with presentations and discussion by local housing activists and artists who have dealt with gentrification in past projects.

AREA#2 builds on the stated goal "to be a shared space to fuel, debate, refine, express and implement our collective goals for a more desirable and livable Chicago and world." This particular issue will focus on food politics through the lens of local groups who are committed to urban agriculture, radical ecology and to creating an alternative food infrastructure in Chicago.

Pilot Television is an artist-built temporary autonomous video production studio. The first collaboration was staged for four days in Chicago IL, October of 2004. Over 150 participants from all over the North American continent converged to collectively produce more than 35 projects, inspired by a theme of "feminist trespass."

The Pink Bloque (2001-2005) was a Chicago-based radical feminist dance troupe dedicated to challenging the white supremacist capitalist patriarchal empire one street dance party at a time....

This video marks a period of dissent and experimentation around the February 2, 2002 meeting of the World Economic Forum in Manhattan (NYC) at the Waldorf Astoria hotel. The global executives and corporate elite attending the annual conference, usually held in Davos Switzerland, carved the streets of New York City into a police state. Meanwhile artists and activist--tactical media practitioners, from around the world created new tools and held workshops intending to send them a clear message: The September 11th attacks will NOT gag the critiques of globalization. This video explores the collaborations and ideas of four collectives working on projects at the WEF protests.

Projects include: modified bikes for printing messages on the streets as you ride by the Bikewriter/Affectech group from Boston, Pret-a-revolter (ready to revolt) protest fashions, New Kids on the Black Block dancing, and decorative Ya Basta! Style sheilds by the Barcelona Las Agencias, Rapid message placement system and other protest technologies for inserting your message into public space as well as large scale graphics displaying our desire to deface powerful people by the StreetRec collective, I-see is a web-based application developed by the Institute for Applied Autonomy, which shows users the location of surveillance cameras in Manhattan and allows them to chart their own paths of least surveillance.

The God Bless Graffiti Coalition, Inc. was founded in 2000 in Chicago in order to combat growing national and international anti-graffiti trends. We feel time has come time that people stand up against the massive misuse of public monies diverted towards graffiti abatement. Instead of spending millions to maintain the dull monotony of the urban landscape and to criminalize creative youth, it is time we demand a rational policy towards graffiti.

In 2002 we first published our Give Graffiti the Thumbs Up brochure to help educate the public about the truth of graffiti. Tens of thousands of copies of this brochure have been distributed around the world. The success of our initial brochure has led us to expand our activities, including subway ads and our latest endeavor, graffiti bible tracts....

Autonomous Territories of Chicago
Posted by nicholas_senn at 7:04 PM